Skip to content
3D printing construction start-up Mighty Buildings has raised $30 million in funding, and announced that it’s now exiting stealth mode.  Having quietly conducted R&D on its proprietary 3D printing technique since 2017, the company is now launching as a fully-fledged ‘production-as-a-service’ business. The firm’s first investment round was led by Khosla Ventures, with participation from […]
Researchers from the Oak Ridge National Laboratory have 3D printed a “first-of-its-kind” smart wall called ‘EMPOWER’. The prototype wall was demonstrated at the Department of Energy’s Federal Energy Management Program’s (FEMP) virtual 2020 Energy Exchange event. Built to highlight the technology’s capabilities and designed for indoor use, EMPOWER combines concrete additive manufacturing and integrated electronics […]
Texas-based construction firm ICON has partnered with the U.S. government-backed Defense Innovation Unit (DIU), to demonstrate the military applications of 3D printing at the Camp Pendleton Marine base. Working with the DIU, ICON trained a crew of eight Marines to use its concrete 3D printers. Despite their limited engineering experience, the troops managed to print a vehicle hide […] 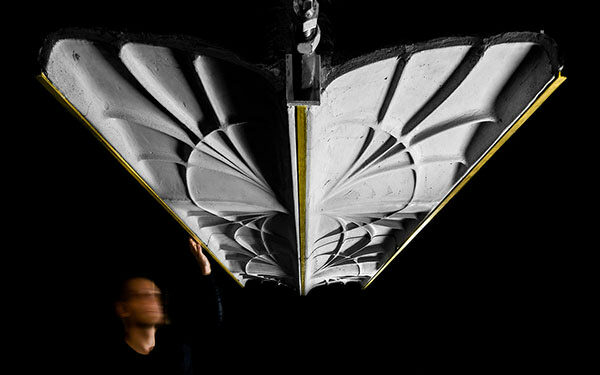 Concrete. Love it or hate it, we sure do use a lot of it. It is the second most used material on the planet, right after water. As an illustration, concrete manufacturing is responsible for 8% of the Earth’s carbon dioxide footprint. If concrete was a country, it would be the third biggest producer of […]
Global nutritional science firm and materials producer DSM is working with Netherlands-based engineering consultancy firm Royal HaskoningDHV and the City of Rotterdam, to 3D print a footbridge from recyclable source materials.  Set to be installed in the green heart of Rotterdam’s bustling Kralingse Bos park district, the bridge will be the first to utilize fiber-reinforced […]

Researchers in Japan are taking a common-sense approach to integrating 3D printing into their construction industry. Most companies that focus on 3D printed civil engineering structures do one of two things: they either build a giant 3D printer in a warehouse that fabricates parts that have to be shipped and assembled on-site or they develop […] 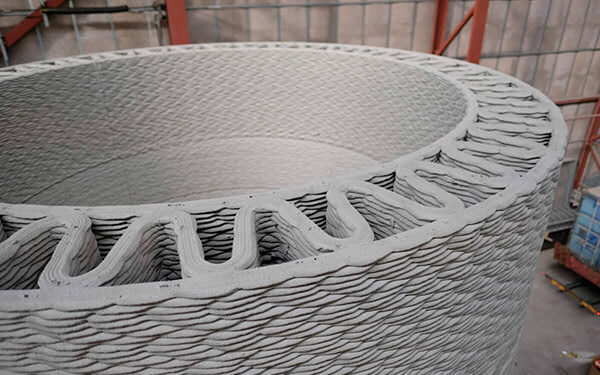 As renewable energy initiatives sweep across the lands (and seas) of the world, an interesting data point has emerged: in many parts of the world, like those near coasts, mountain ranges, and plains, wind power is more efficient than solar power. Energy companies have been rapidly installing wind farms in those areas, and there’s more […]
GE Renewable Energy, COBOD, and LafargeHolcim have announced a three-way partnership to co-develop 3D printed, “record-tall” wind turbine towers. Leveraging COBOD’s concrete printing technology with LafargeHolcim’s leading construction materials, GE will be able to tie the multi-year project together with its extensive resources. The trio intends to boost global renewable energy production while lowering the […]

A building’s facade
is a challenging, multi-functional aspect of the structure that carries a lot
of responsibility and expectations. It acts as a barrier and protects the
inside from the elements, determines how much light enters the space and also
provides the overall aesthetic to the building. Find out how architects are
using 3D printing to streamline architectural design and construction
processes, freeing up more time and costs to continue innovating.

Deep Facade is a 6×4 meter aluminium structure composed of 26 sections of looping metal cast in a 3D printed open sand mold. It was created by students from the Digital Fabrication course at ETH Zurich in 2018 and evokes the folds of the cerebral cortex. This process makes use of the computational design method called topology optimization, where lightweight material can be used to create highly stable and efficient structures. They used binder jetting technology to fabricate the sand molds which allowed them substantial geometric freedom and sped up the fabrication process due to fast printing time, eliminating patternmaking and reducing material waste. The complexity of the geometric shapes of Deep Facade would not have been possible without the use of digital design and 3D printing. Each mold took under 12 hours to print and once printing began the facade itself was formed in less than half a week. The students’ work on Deep Facade demonstrated that the production of parts with 3D printed sand molds was faster and cheaper than traditional mold making methods, and also showed how efficiently one of a kind complex geometric designs could be produced.

In Lupburg Germany, FIT created a 3D printed aluminium facade for its boarding house made up of panels each with its own complex pattern of cavities to showcase how to use 3D printing in construction to favor economical individualization. The panels each have a unique arrangement of cavity shapes, each created using aluminium inserts in the molds. They were able to produce 20 different panels simultaneously in rotation. This method of producing unique panel pieces demonstrates that 3D printing is a key resource when it comes to the future of cost-effective mass-individualization and customization in construction.

The new building at the site of the former Domino Sugar Factory in Brooklyn, NY. consists of two interlocking structures with facades of all-white concrete precast from 3D printed molds. The crystalline facades were designed to emulate sugar crystals and are self-shading with each piece shaped according to its solar orientation. The variations in the panels meant that over 100 different molds were needed, and creating each one took between 14-16 hours instead of taking 40-50 hours each if the molds were made traditionally. The efficiency of the molding process freed up substantial time and the 3D printed molds proved to be more durable than traditional wood and fiberglass molds (which can be used up to 10 times), as they were able to be reused 150-200 times.

In order to create an upward slope from the 4th to the 40th floor in the 59-story Rainier Square Tower in Seattle, Walters & Wolf and digital manufacturing company 3Diligent Corp printed aluminium nodes and wall curtains. 140 3D printed v-shaped nodes and square cut pieces of curtain wall were custom fabricated to geometrically accommodate a different angle for each section of the building. 3Diligent gave Walters & Wolf the option between investment casting and 3d printing and Walters & Wolf decided to use the 3D printed nodes because of their level of precision and structural integrity. Each node was created with varying dimensions up to a cubic foot, another testament to the efficiency and flexibility of 3d printing.

At the Technical University in Munich, Moritz Mungenast and Studio 3F began a project to create a 3D printed facade envelope that integrates ventilation, insulation and shading to become the new facade of the Deutsches Museum in 2020. The facade design is flowing and translucent, resembling Shapeways’ translucent material Accura 60. Studio 3F built a 1.6×2.8 meter section to test for a year to improve the design before making another polycarbonate prototype. The team was able to print 1:1 scale models and prototypes along the way with ease, meaning they were able to fully comprehend the viability of their design, determine production costs, communicate their ideas to their clients and continue developing what they hope to be a widely used facade technology that combines form and function.

In addition to these innovative projects, more and more architecture firms are utilizing 3D printing to achieve a higher level of freedom in design and as a way of making processes more time and cost efficient. 3D printed molds hold up better than traditional wood casts and have a higher range of possibility when it comes to complex geometric shapes. Because of the range of materials available, 3D printing also assures a level of structural reliability for the printing of end-use parts.

Shapeways can print with a variety of materials, including stainless steel, translucent and high strength plastics, and can help you get started with producing custom molds and parts. 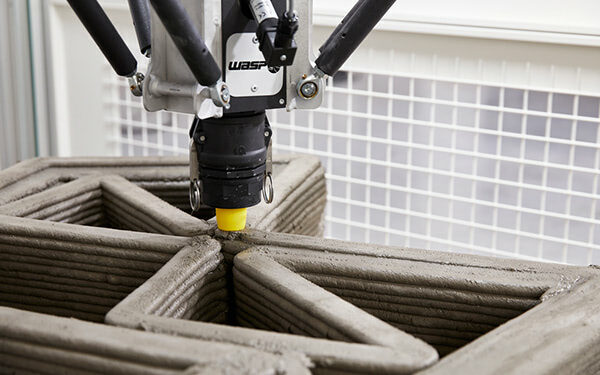 Italian industrial 3D printer manufacturer Wasp has just released the latest addition to its range of industrial and architectural 3D printers, the Delta Wasp 3MT Concrete. As you can guess from the product name, it is a concrete mortar printing device in a delta-type printer configuration. The new variant architectural printer has a build volume […]