Skip to content
The Severance Hospital of the Yonsei University Health System (YUHS) announced today that it will be getting ready to commercialize its first 3D printed artificial eye after three years of research. According to the Severance Hospital, over 60,00 patients in Korea require an ocular prosthesis (a prosthetic eye) as a result of severe medical conditions, […]

Israeli additive electronics provider Nano Dimension announced in April that it would be expanding its coverage in the Asia Pacific (APAC) region, and today has made good on that announcement. The award-winning company has officially entered the Chinese market now, thanks to its strategic partnership with top 3D printer distributor the AURORA Group.

The AURORA Group is the majority shareholder of 3D software and 3D printer provider General Integration Technology (GIT), which recently purchased and installed a DragonFly 2020 Pro PCB 3D printer from Nano Dimension for its Taiwan showroom. In addition to this new partnership, AURORA has also purchased a second DragonFly 2020 Pro.

“China is one of the world’s largest and most important electronics manufacturing and design markets, and establishing the correct foothold in the market is key for Nano Dimension. AURORA has years of operating experience in the manufacturing sector, and with its extensive resources and unique network of 1,500 offices, 300,000 customers, including more than 3,000 customers in electronics industries, we believe it is very well positioned to give us fast market access to realize the full potential of the DragonFly 2020 Pro in China,” said Amit Dror, CEO of Nano Dimension. “We look forward to developing the Chinese market together by leveraging AURORA’s significant presence.”

As a result of the partnership, AURORA will market and sell the DragonFly 2020 Pro to customers in China, which will help grow Nano Dimension’s market coverage in APAC.

“Providing our customers with the very latest in high-quality, innovative 3D printing solutions is key to the success of our company,” said Daniel Chi, GM of 3D Business Unit, AURORA Group. “Forming a strategic relationship with Nano Dimension helps us expand our offering to now include capabilities for 3D printing electronics. The Nano Dimension DragonFly 2020 Pro is a groundbreaking technology that opens unimagined possibilities for electronics designers and manufacturers.”

A January 2018 market research report from the International Data Corporation (IDC) shows that the quickly growing Chinese 3D printing market is leading Asia. 3D printing in the country benefits from both industrial and private consumer investments and government support, so partnering with AURORA for additional APAC coverage is a smart move on Nano Dimension’s part.

“This is an important moment for our recently established Hong Kong office,” said Nano Dimension’s APAC Director Gilad Reshef. “We are proud to partner with AURORA as our leading partner in China. The partnership with AURORA deepens AURORA’s exposure to additive manufacturing by expanding into 3D-printing electronics, paving the way for new markets and applications.”

This news from Nano Dimension and AURORA isn’t the only newly announced 3D printing partnership. London startup Mayku has just released its innovative desktop vacuum former, the FormBox, for sale in the UK and the US, with help from its own new partner – 3D printing specialist GoPrint3D.

“We’re really excited about it as we think a lot of 3D printer owners will want one to complement their existing 3D printer,” GoPrint3D’s David Whitehouse told 3DPrint.com.

A drone case being removed from the mold.

GoPrint3D, which is also a distributor for EnvisionTEC and learnbylayers, was launched six years ago as a part of Express Group Ltd, which has provided 2D printer repair and spare parts to the UK for three decades. The company sells, repairs, and hires 3D printers, in addition to providing professional services.

“We were so impressed when we first saw the FormBox that we immediately backed it on Kickstarter,” explained Jo Young, Managing Director at GoPrint3D. “Now we are a partner as well as a backer. It’s the perfect accessory to 3D printers like the Form 2 so we are delighted to add it to our range.”

In 2016, Mayku crushed its original $50,000 Kickstarter campaign goal for the FormBox by over 1,000%. The desktop vacuum forming machine, which can be powered by a vacuum cleaner, lets makers and designers create items in all sorts of materials, ranging from concrete, ice, and plaster to soap, chocolate, and wax, and others as well.

The machine is user-friendly, and fast as well – able to make molds in just minutes without having to rely on any additional software or digital model manipulation. “Vacuum forming was previously something found in makerspaces and in schools due to their cost and size,” explained Ben Redford, Mayku’s Co-Founder and CPO. “We are thrilled to have the support of the 3D printing industry and have been blown away with what makers have been designing.”

The FormBox is a complementary new hardware addition for 3D printer owners. Users can easily vacuum form a 3D print using the FormBox, which can then be used as a mold for fast replication in multiple materials that are not able to be directly 3D printed at this time.

GoPrint3D now has the FormBox in stock and available for purchase for a price of £499 excluding VAT.

Discuss partnerships and other 3D printing topics at 3DPrintBoard.com or share your thoughts in the Facebook comments below.

Aurora Labs is known for its lightning-fast 3D printer, the S-Titanium Pro, which has drawn interest from many high-profile organizations including NASA. The latest company to be interested in the 3D printer is VEEM, an Australian business that specializes in high-tech propellers and gyrostabilizers. The two companies have now signed a non-binding term sheet that sees them working together for the next five years, possibly more.

The terms of the agreement give VEEM early access to Aurora Labs’ 3D printers and Large Format Technology, as well as the potential for purchase of said technology and the possible opportunity for R&D in areas that are appropriate for VEEM’s business. The non-binding term sheet is based on a four-stage process, as outlined by Aurora Labs:

“With our modern world recognising the finite nature of natural resources and the full cost of energy, the desire to move away from traditional reductive manufacturing is growing,” said Mark Miocevich, VEEM’s Managing Director. “Additive manufacturing through 3D printing is rapidly developing around the world. From being a very expensive option for small, highly sophisticated components, recent technical developments in 3D printing are showing the future path leading to larger sizes and far more rapid production rates. Aurora Labs has developed the most advanced process that we have evaluated and represents a significant step forward in large and rapid 3D printing. VEEM are excited to be able to partner with Aurora Labs to bring the future of additive manufacturing to the present.”

“We’re extremely pleased to be in talks with VEEM, and their drive to be at the forefront of technology and innovation makes them an ideal industry partner for us,” said David Budge, Managing Director of Aurora Labs. “When you couple that to their ambition to dominate the global market in their chosen field then the unique fit is even more appropriate. VEEM currently create castings up to 14 tons in size on a daily basis and we are looking to help them improve their production capacity through innovative use of our Large Format Technology. It’s encouraging to be expanding on our Industry Partner Program which confirms the interest in the technology we are developing.”

There is no assurance that any legally binding agreement will be entered into, although Aurora Labs is optimistic that one will be reached. VEEM will be given the opportunity to invest, but there is no fixed agreement for the company to acquire shares in Aurora Labs at this time.

The non-binding agreement with VEEM is part of Aurora Labs’ Industry Partner Program, and Aurora is in talks with several other organizations about becoming part of the program. The program focuses on four key areas: early access to Aurora Labs’ technology; possible purchase of that technology with input into printer design; possible participation in research projects; and possibility of acquiring equity stake.

Underdeveloped regions often become grounds for the proliferation of diseases. While its hard enough to treat diseases with limited resources, it can be just as tough to simply detect them. In an effort to identify one particular virulent disease, researchers from South Australia, Texas and Ethiopia are using 3D printing technology to locate deadly parasites. […]

It appears Nano Dimension is striking new deals and ascending in growth every few days. While the Israel-based company is busy distributing their printers for crucial services everywhere from Solar panel companies to on-demand electronics services, they’ve also secured a massive Chinese distribution partnership. This is a massive win for the company considering how China is […]

Sinterit, a Poland-based manufacturer of Selective Laser Sintering (SLS) 3D printers, has revealed the LISA 1.5, a new generation of the market’s first affordable desktop SLS 3D printer – the LISA 1. This launch comes two months after the release of the LISA 2, the desktop SLS 3D printer for industrial applications. The LISA 1.5 […]
Made In Space, the California-based pioneers of off-world 3D printers, plans to use 3D printing to turn asteroids into autonomous spacecrafts that can potentially fly to mining stations in outer space. This plan is part of the Reconstituting Asteroids into Mechanical Automata (RAMA) Project, which is funded by NASA’s Innovative Advanced Concepts (NIAC) program. Through the RAMA […] 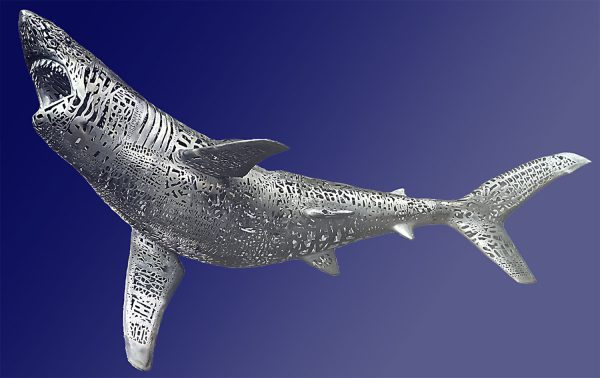 The artist has taken advantage of developments in 3D technologies, where imaginative three dimensional objects are developed from digital files. Through experiments with various materials Cardacino has created beautiful and captivating sculptures.

The shark’s “skin” is made of the repeated word, shark. Consider what is appearing in our mind regarding “shark”.

When we think, “shark,” our minds connect to an infinite variety of things, each with their own conditions: ocean, other fish, swimmers, “Jaws,” “Shark Tank,”,danger, beauty, conservation, fear, etc.

The hollow sculpture and repeated name can move viewers to see that shark is a big fish, yet realize that the psychological construct we mentally create which “sees” a shark, colors our observation. We can conclude that conditioned thoughts we bring to the world color it, causing our actions and reactions.

Approximately 60,000 patients in Korea require an artificial eye, however 1/3rd of them find themselves not receiving one. Severance Hospital in Korea are looking to remedy this problem. Their Korean research team”s ambition is to make a 3D printed eye commercially available worldwide. Furthermore, they hope to set up a system that encapsulates consulting, design, production and […]

Sharebot, an Italy-based company specializing in the development of high-precision 3D printers, is expanding its presence in Germany and western Europe with a new showroom in Hamburg – Sharebot DE. The grand opening celebration is an opportunity to learn more about the company from a range of 3D printing experts, including Sharebot executives. In partnership […]